New iPhones include components from Intel and Toshiba - My Blog

Home » New iPhones include components from Intel and Toshiba

A comprehensive dismantling of the latest iPhone XS and iPhone XS Max phones, which became available for purchase in stores around the world on Friday, revealed the unseen and unexplained features by Apple, as the process was carried out by repair company iFixit and technology analysis company TechInsights, and showed The process of disassembling and analyzing the new hardware parts step by step There are no major changes compared to last year’s iPhone X, but the built-in changes could be significant.

The new iPhone XS and iPhone XS Max are an upgrade over last year’s iPhone X, while the cheaper iPhone XR has a similar design, but it lacks some features.

At its annual launch event earlier this month, Apple announced its latest lineup of iPhone smartphones, including the iPhone XS, iPhone XR and the most expensive iPhone ever, iPhone XS Max, along with the fourth generation of its smartwatch. Apple Watch 4.

Through the disassembly process, it appears that Apple replaced the previous dual battery system with a single L-shaped battery in the iPhone XS, but the larger version of the XS Max did not get such a change, and the iFixit team notes: “The XS battery looks strange and new, While the XS Max battery comes with a familiar design.”

The dismantling process showed that the latest iPhones from Apple use components from Intel, Toshiba, Micron and others, and the issue of supplying components for iPhones is considered a bargain for chip makers and other manufacturers, and while Apple publishes an extensive list of suppliers every year, it does not clarify details about The quality of the components supplied by these companies and insist on the confidentiality of their suppliers.

This makes disassembly the only way to find out and identify the phone’s internal hardware and suppliers, although analysts also recommend caution in drawing conclusions because Apple sometimes uses more than one supplier for a single component, and the dismantling process did not indicate the presence of Samsung or Qualcomm components. .

Samsung had previously supplied Apple with memory chips, and analysts believe it is the only supplier of OLED screens included in last year’s iPhone X, while Qualcomm has been a component supplier to Apple for years, but the collaboration was terminated after a widespread legal dispute in which Apple accused Qualcomm of patent licensing practices. Unfair, Qualcomm responded by accusing Apple of patent infringement.

Qualcomm said in July that Apple intends to use a competitor’s modems in its next iPhone releases, which was demonstrated by the dismantling process, as the iPhone Xs and iPhone Xs Max use a modem and communications chips from Intel instead of Qualcomm.

According to the teardown process, the new iPhones included the latest DRAM and NAND chips from Micron and Toshiba, and previous iPhone 7 teardowns showed Samsung-made DRAM chips in some models.

TechInsights’ analysis of the 256GB iPhone Xs Max revealed that the DRAM chip was from Micron, while the NAND chip was from SanDisk owned by Western Digital, which is working with Toshiba to supply it with NAND chips, and TechInsights has found in the past that Apple uses different suppliers of DRAM chips And NAND is in the same generation as phones.

It seems clear that Apple competes with Samsung and wants to reduce its dependence on its chips as possible, so it resorted to using Toshiba to supply NAND chips and Micron to supply DRAM chips, and it is clear that Apple has replaced one of the chips manufactured by Dialog Semiconductor within the iPhone Xs Max has its own chip. 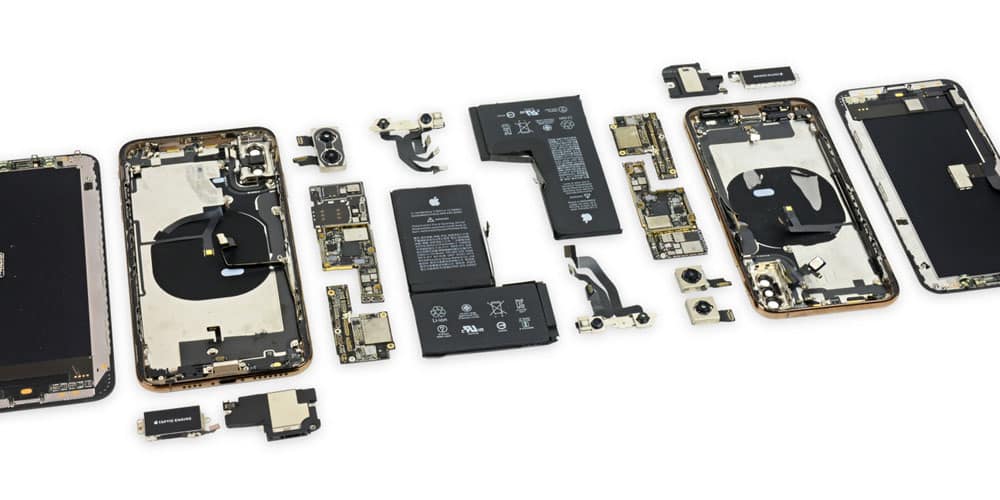